There once were two brothers who lived in two caves in the same cliff face. Their lives were simple but their days were filled. They did many things together but even when separated their patterns were the same. Every morning they would both leave their huts to scavenge for roots and berries, eating what they found, knowing quite a few good bushes. They would spend the afternoon wandering idly, yet searching for tracks and other signs that would lead them to an animal they could kill with rocks to eat. Some days they would find one, and have a feast, other days they would not. On the days they were unsuccessful, they often camped on the bank of a nearby river where there were plentiful fish that each brother could usually catch a few of for his meal. When winter came, they performed much the same tasks, though they had tighter stomaches.

One day, in the summer, one of the brothers was idly regarding a spiderweb. A fly had been caught and the spider would soon arrive to wrap it up and eat it. Flies tasted just as good to him as to a spider, so he grabbed the branch the web was attached to and ripped it off, snatching the fly out of the web and popping it in his mouth. He looked down at the broken spider web with some strands still stretched between the fork in the branch, and he was struck by insight.

It took him a considerably long time, he often had to claim eating some bad berries to get privacy when it was not nighttime, but with branches and vines he eventually fastened a net that he determined could hold many rocks. He took it to the stream and caught many fish, and so it came that his stomach grew wider.

To any fellow Americans reading my blog: I believe that, at the end of the day, we can all agree that we want America to become a better country and its citizens to become better people. We can agree that our society has problems, and we may disagree on solutions, but the end result is a predicted better society. I want to end poverty, and I think the fastest way there is by guaranteeing everyone a $20,000 a year minimal income. Others think the fastest way there is by reducing the government to near-anarchy.

But what really disgusts me is the focus on America, and American citizens. Why are we so special, us born above a specific plot of land? Why are our needs so much greater than the needs of the Chinese, or the North Koreans, or the Africans, or the Arabs, or the French? The truth is we are all human, the difference in genetic makeup is near-indistinguishable between any two humans, even to us, and the total difference altogether between any two humans is quite indistinguishable to other species, focusing overly on "friend or foe".

Every human culture participates in baby-talk, they have an understanding of what it means to promise, our brains appear to be wired in such a way that makes narrative metaphor a base form of interpretation. We are all human, and that is more binding and real than any artificial label that depends on the area in which you're born.

I was experimenting with a pseudo-many-worlds quantum physics idea, and this screenshot came of it: 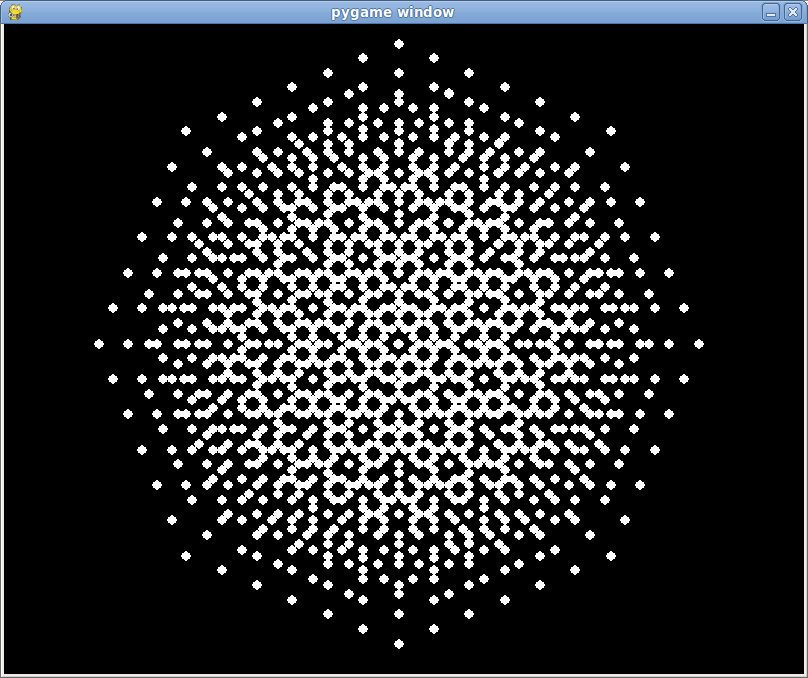 Beautiful, isn't it? Here's the source if you want to play around, it's optimized as much as I know how without switching to C, any suggestions would be welcome:

For rhetorical flair, use X in 10

Why is it that some studies report their percentages as "X in 10" vs. a simple percent? I'm almost certain it's for rhetoric. 40% is just a simple number, it feels uncertain (since uncertainty corresponds to probability), it can't hurt you... But when I mention that 4 out of 10 voting citizens in Delaware voted for Christine O'Donnell, now it's scary. "I know 10 people, I can think of them in my head, and I can picture 4 of them--that's a lot!--having such idiotic views."

The Kinematic equations are the bread and butter equations of Newtonian projectile motion, and are quite useful for games. There are four of them, but you just need to remember two very intuitive ones and you can derive the other two from there. For one derivation, we need Calculus, for the other, it's straight Algebra. But don't be afraid, these are trivial! I'm mostly doing this to refresh my memory and it may help someone.

When a religious person attacks an atheist, proclaiming that they're the ones who are blinded by faith, they are being ridiculous, but they are not necessarily wrong. They are being ridiculous, because their entire belief system values faith, and when they use faith as a criticism of atheists, they're criticizing themselves at the same time. To them, isn't faith a good thing?

But they may not be wrong. Consider the atheist child whose parents are atheist. This child has missed out on an important life-experience: that of changing his mind on a very cherished belief. I used to be a Mormon, but over the course of several years I gradually retreated, finally declaring myself a full atheist who nevertheless can take elements of spiritual philosophy into my own framework. Taoism is a great philosophy regardless of its spirituality, and I think many atheists can learn a lot of "the Tao". A slightly lesser experience though still important is discovering that Santa Claus doesn't really exist.

So take those children, who grew up just being told religion is wrong. How are they any different from the counterfactual versions of themselves that grew up in a Muslim environment, simply being told that Islam is correct and atheism is wrong? They're not. The atheist parents may give reasons for their view, the Muslim parents may give reasons for their view, but until the young atheist makes an honest, critical examination, their beliefs are formed from two places: their parents word, which children trust pretty highly, and what is called "faith". They don't have much in the way of evidence apart from what their environment says, they just hold their belief, haven't given it serious thought, and faith is holding a belief without requiring justification for that belief. They don't need justification, they just believe it. (Sure, justification is given to them, but after taking the belief they no longer need it unless faced with strong counterarguments.)

Let it be reiterated that Reversed Stupidity Is Not Intelligence. One of the traps I see Selfish egotism-based people fall for is an idea of Man as God. Traditionally, religious groups view God as the shepherd, and the People as the sheep, and therefore the people are below and ought to worship their lord. People are corrupt, people are sin, people don't have all the qualities they ascribe God.

It's fairly reasonable to call this stupid. And yet the reverse, that Man is a shepherd, that Man is good, that man is sinless, that man is rational... That's not an accurate picture, either. As evidenced by the Objectivists and the Libertarians, this kind of thinking is just as dangerous. If man is a shepherd, then he should take care of himself, and no one should take care of him, thus we should get rid of all governmental welfare programs! If man is a god, then anything he decides to do is worthy, let him do it! Even if this means killing people, then the other gods can just team up on him and kill him if they want.

The truth is of course in between, even the most shallow of views of psychology should make this blatantly obvious. Humans have a strong need for self-determination and want some degree of control in their lives; at the same time, humans need help from time to time, some humans more than others, especially depending on their developmental background. Humans have a strong sense of duty and obligation to others. Their family, and even strangers. Humans make many, many, many mistakes, and yet we've gotten to the Moon, we can create Life in the lab, we can collide fundamental particles at relativistic speeds to see what happens, and if the future is a bright one, we will create superintelligence.