If you're a programmer of any quality, I think you also need to have a firm grasp of mathematics. For at least 95% of the cases (I submit that there are some great programmers who really aren't good at math-in-general), there's just no escaping it.

I answered a question a while back on Yahoo Answers. The person asked:

When are we ever going to need math like Algebra, Geometry, Calculus, etc in life?

Altruism is simply about helping those around you with whatever means you can afford at the time. Only a fool would live in poverty to help a few others out of poverty; better to use your full potential and money-making abilities and help when you can without degrading yourself.

New tag: thought will denote entries that aren't really thought-out much but contain what I think is a neat idea and something to possibly look into later.

So I'm reading The Moral Animal, which is a fantastic book. (I started reading it a while back but got sidetracked.) It contains many nuggets of information and I'm not even at the half-way point yet. But one thing that was particularly interesting was a citation from this paper (PDF) (I think; I haven't read it all yet) about how some women are quite happy to trade parental investment for good genes, and this often happens unconsciously.

"Studs", the athletic and strong-build types, typically have "good genes" a woman may like. But those males are also more likely to mate with as many women as possible rather than settling down, one reason being they know they have sought-after genes.

I've decided to make a list of some of my current beliefs, without really justifying them, so I can just point here for future reference when people misconstrue my thoughts. I'll try to be clear in writing and categorize a little, but this post is no absolute authority on the matter, and if at later dates I appear to contradict myself assume I believe the new thing. Here goes, in no particular order.


I'm atheist. I think religions should be wiped out as an idea at least to the extent that Nazism has been wiped out as an idea, but I would be happier if there were no practitioners left at all of any faith. I don't think even a sizable minority of the world's religious people are evil, let alone bad. I like some ideas religions have taught, but I dislike the reasons they want you to follow the ideas (e.g. God says so). I think anyone who gets their moral guidance from the Old Testament has either never read it, are cherry picking unfairly, or are morally messed up.


I love math, and I love science. And in general I've gotten high marks in classes for these subjects, but I don't consider myself a top person in either, just above-average. I took Algebra 1 in 7th grade, Geometry in 8th, Algebra 2 in 9th, Pre-Calc Honors in 10th, AP Calculus BC (score of 5) in 11th (so I know about Taylor series and so forth which are epically cool), AP Statistics (score of 4) in 12th, and Linear Algebra this last semester in college. I continue to study Bayesian Probability Theory on my own, with E.T. Jaynes' book on my list. Next semester I'll be doing Discrete Math. Now my math background is public.

Truisms and Tautologies Bug Me

Well, that's all I pretty much have to say. But I found this so-called "axiom" of Objectivism to be one of the most annoying truism ever: "Existence exists."

Well, yeah. Here's a fun exercise, though. What is existence? Without telling you anything (existence is kind of a fuzzy concept), I'm going to say existence is the set of all things that exist. And so the above statement reduces to "Things that exist, exist."

Well yeah... Things that fly, fly. Things that swim, swim. Things that do A, do A. It's a truism, and a tautology, and it pisses me off. Why? Because it conveys no useful information. Okay, that's just an annoyance: what pisses me off is when people proudly chant tautologies like they're useful. e.g. calling the statement an "axiom" from which something could be derived. I was going to do a post about "false axioms", but really I don't need to. I just want to point to various math axioms postulated throughout the centuries and say those aren't "false axioms" because they're proper. Even the ones that were later reduced to theorems, were not "false axioms". But the Objectivist "axioms" are indeed "false axioms", and I'm certain I could find more if I went googling.

It's a fun phrase, and I want to explore what it means. It's easy to be "atheist", isn't it? You just reject the notion of any supernatural deity. Problem solved. And I'm happy that more and more people are becoming this variety of atheist.

I suspect the desire to make atheism mean a bit more is probably related to the desire of having a religion in the first place, but unlike other theist traits it's not simple to get rid of. I'd argue it's part of human nature to group things and then desire to be with certain groups. So when I say "You aren't atheist enough!", I mean you're not atheist-enough for my standards of atheism, which are high enough to only fit a certain proportion of atheists. I've added more detail to the label "atheist", because that's one thing I don't mind being associated as. It's not enough to just say "Yeah, I don't believe in the Christian God or any god/gods you care to name."

So what's this extra meaning? Well, to be atheist enough, you first have to reject all notions of supernatural or non-explainable. My own journey to atheism serves as an example, but it happens to many others as well. I started off rejecting Mormonism, my faith, not outright but as something to be identified with. I picked up Taoist beliefs, and sort of believed in some mystical Way that permeates all. I called myself an Agnostic Taoist Mormon. (And I learned of the Church of the Flying Spaghetti Monster, and changed that to be Spagnostic instead of Agnostic. I never believed in Him, but it's still a great religion. :) 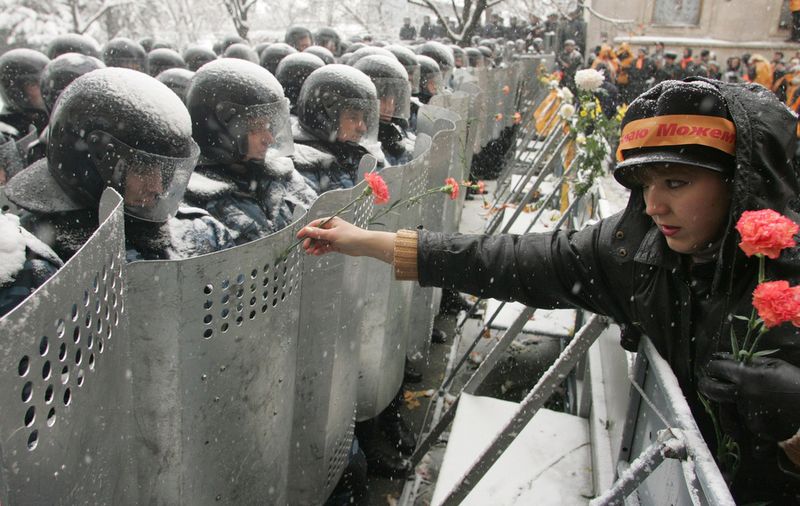 A Ukrainian woman places carnations onto the shields of anti-riot policemen standing outside the presidential office in Kiev, November 24, 2004. Ukraine's authorities raised the stakes in a face-off with their liberal opposition on Wednesday as they prepared to announce results of a disputed election that are likely to infuriate thousands of protesters in the streets. REUTERS/Vasily Fedosenko

This woman expresses the meaning of non-violence and compassion toward the "enemy". Carnations usually symbolize love (and I somehow doubt she's loving them for the fact that they will beat opposition). The expression "love your enemies" fits here. Another important note on strategy is to remind your opponents to love.