I was introduced to Crash somewhere between 2006-2008. My Sociology teacher in high school had the class watch it. I enjoyed it (being a teen with no taste of course!), and I have a DVD now and have watched it again a number of times since (guess I still have no taste?). Sometime in 2010 I learned that a lot of so-called intellectuals really hate the movie. I didn't really understand, and I still don't entirely, why it deserves hate. It's at least better than Twilight, right?

The criticisms are typical, which doesn't make them invalid, just typical. It has a shallow plot, shallow characters, single-dimensional characters, perpetuation of stereotypes, predictable in parts, tugs at heartstrings instead of delivering a clear unambiguous message, perpetuates the supernatural, and so on. I think I just have a much lower standard for movie quality than these critics who hate Crash; if I want depth and exposition I'll read a book. I'm fine to admit that my brain goes to half-power when watching a movie or playing a game. These are entertaining activities, not intellectually stimulating ones (even the really good games or movies). Of course, the half-power thing applies to most fiction I've read too--most of my reading these days is non-fiction.

The reason I like Crash is because it offers a lot of intellectually stimulating after-thought to chew on, which includes its various criticisms. And at this point I sympathize with critics, because when I got a Netflix account, I was honestly surprised that Crash was the top-rented-out movie. Where are all the discussions of the issues raised? How come so many people I talk to still haven't seen it or don't care about talking about any of the issues? Why don't people remember much from the movie?

I think it's just another manifestation of our cultural problem with stupidity. People had trouble following Inception, come on now it wasn't that difficult. A lot of good literature (and a lot of bad) is required reading for K-12 students, but that doesn't seem to make much difference in what students tweet about. Just because someone passes Calc I and Calc II doesn't mean that they'll recognize e when it's right in front of them.[1] Analogously, just because someone watches a movie that, no matter how strongly/weakly, encourages after-movie discussion, that doesn't mean any after-movie discussion or thinking will take place.

Maybe all Crash succeeded in was making people realize that there's a difference between Persian and Arab. I don't even think I can give it that, though. Sigh.

[1] True story from a Junior-level math class, where I had to pause my reading of a book more interesting than the lecture to answer the question that apparently nobody else could think of the real answer to within 10-20 seconds after someone guessed was 1: 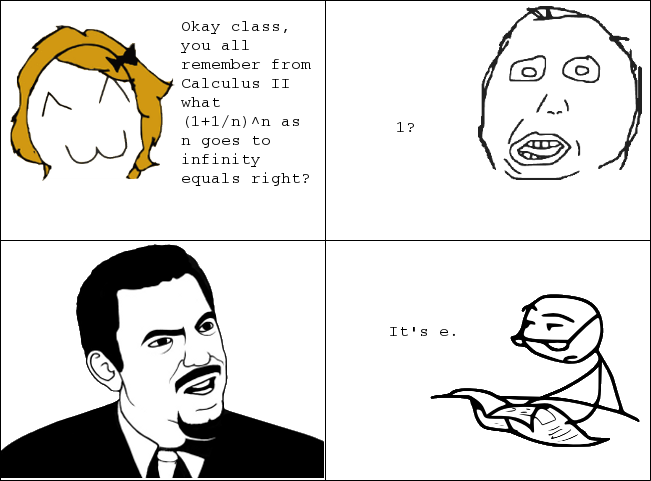 P.S.: I love my Naive Bayes button. I was just going to tag this as fodder, its suggestions made me reconsider.